In the year 2000, after living alternately in Czech Republic, Portugal, Belgium and England, Hubert Roestenburg moved to Germany. Quite by chance he settled in the Eifel mountains near the Moselle river valley, not far from the spot where William Turner painted the Calmont some 200 years earlier. Moving here was like a re-birth for the artist who had, because of a family tragedy, not touched a paint brush or pallet knife for a year and a half.

The years that followed would become one of the most productive and inspired periods of his career. It was befitting an artist of the stature of Hubert Roestenburg, who is considered to be the last of the German Expressionists, to be invited to give a retrospective here at the Palace in Ludwigsburg.

Scroll down to view the paintings.

We hereby open the exhibition of paintings by the Dutch artist and philosopher Hubert Roestenburg, who is referred to as both a classical modernist and an expressionist. He is one of the greatest painters in the history of painting. And if we begin to measure him and make comparisons, the following names come to mind: Rembrant van Rijn, Peter Paul Rubens, Vermeer, Goya, Vincent van Gogh and Marc Chagall.

In my mind Hubert Roestenburg always tops the list. In fact it’s impossible to compare him. He is simply the master, a genius of the Postmodern. He creates the most beautiful pictures in the history of painting. He is of course also an Expressionist of the highest order, in the company of German Expressionists such as Emil Nolde, Oskar Kokoschka and Wassily Kandinsky, however with a signature style all his own.

Hubert Roestenburg’s paintings have been created for eternity. Perhaps that’s why Hubert Roestenburg has been described, in the British press as “Gift of the Lord”. Art critics in Germany describe him as “the Hand of God”. 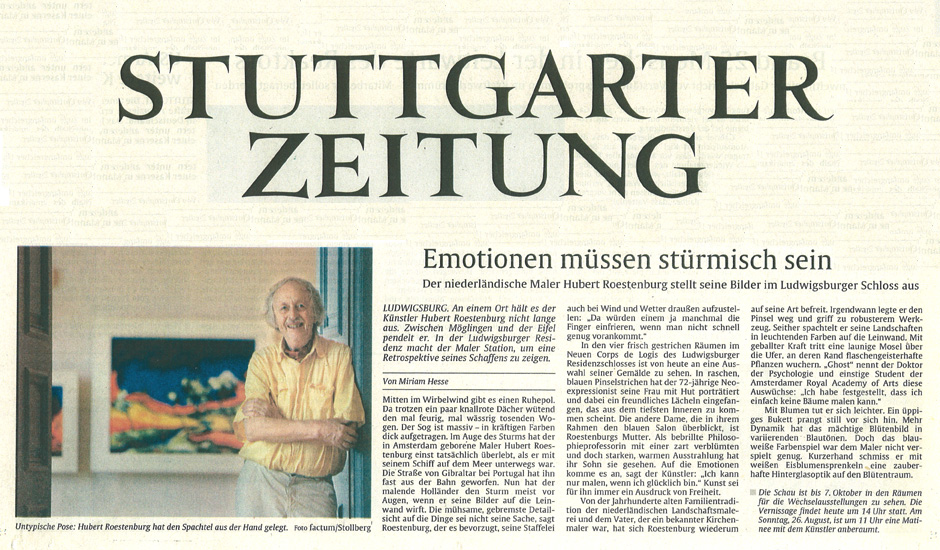 Click on the images to view the paintings in all their splendor.